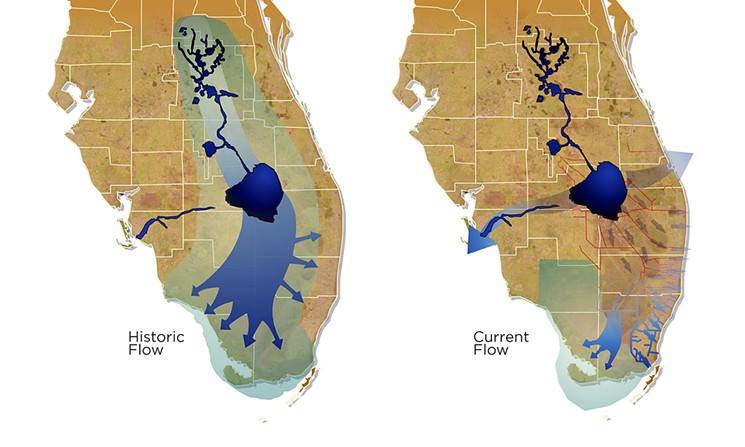 Martin, St. Lucie, Palm Beach and Lee are suffering from the outbreak. All of these areas are south of Anna Maria Island. The majority of the blue-green algae is on the Atlantic coast of Florida, while little is on the Gulf coast.

The Blue-green algae in the four affected counties is described as a guacamole thick mat floating toward the waters surface. The algae has a putrid smell, and is also harmful to both people and wildlife.

A state of emergency is in affect in the four counties by Governor Rick Scott. High amounts of rainfall, high temperature, pollution and nutrient rich water cause the outbreak. The bloom originated in lake Okeechobee, and was spread to St. Lucie and Caloosahatchee Estuaries that lead out to coastal areas. Lake Okeechobee water was released to mitigate flooding. Subsequently, as the water made its way through the estuaries it brought the algae with it.

What is causing it?

Historically water from Lake Okeechobee in the center of the state makes its way south through the Everglades watershed. This is where it goes through a more natural filtering process. This historic process reduces the amount of algae. Water is moved to coastal estuaries for flooding risks per water management decisions.

The Army corp of Engineers began reducing the amount of water released into the Caloosahatchee and St. Lucie Estuaries as of July 1, 2016 to help reduce the effects of the blue-green algae on coastal areas. The full impact of the algae bloom is still playing out.

If you are planning or have planned an Anna Maria Island vacation you are safe to swim. No reports of algae are in effect. Red tide is not currently around Manatee County during the bloom.

While on Anna Maria Island enjoy a gorgeous day on the beach!